How lovely that you’ve found my website. I am an independent author, artist and embroiderer. I completed the MA in Writing for Young People in 2006 and have recently joined a group of indie children’s authors called Electrik Inc. Enjoy exploring!

I have been writing for squillions of years. Despite having a twin brother (whom I love, btw), I was a funny lonely child; I always felt as if I was on the edge of a circle of people looking in wistfully, wanting to join in but not really knowing how. I think I’m still like that, happier watching and noticing than being watched and noticed. Maybe it’s a common enough writer’s syndrome.

I completed the MA in Writing for Young People in 2005/6 and since then have been on a mission to build a little following of readers who like what I write. I love drawing, art, beaches, fish and chips, trees, singing church music, accents (I don’t have one and wish I did). I hate plastic bags and chewing-gum. My ambition is to have an illegible signature and to go back to the Outer Hebrides.

I have recently joined a publishing collective called Electrik Inc. I am thrilled and honoured to have been asked to join, as there is a huge amount of industry expertise in the group.

Indie publishing is where it’s at, folks. Beats working in a benefits office, tightrope walking, selling double-glazing and serving carrots to people who don’t want to eat carrots. We have an obligation to make self-published books as good as they possibly can be. That way the status of the profession is raised and it becomes more respected and valued.

My book is called The Paupers of Langden and was published in February 2014. I had huge fun illustrating it and designing the cover, less fun doing the formatting; plates were thrown. It’s been very well received and has a great review in the August 2014 issue of Books for Keeps plus a load of five star reviews on Amazon. There’s a spoiled princessy princess, a plucky servant, some seriously nasty posh people and a murder plot. And a horrible disease you wouldn’t wish on your worst enemy. Actually, you might, in all honesty.

I’m currently working on the sequel, which is called Green Gold. 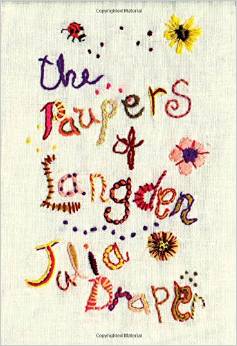 Buy from Julia
Buy from Amazon 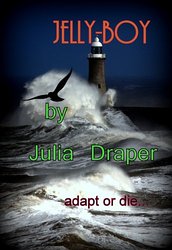 “I found this book hard to put down... Altogether a very satisfying read!”

Three days in a disused lighthouse with a dead sea-gull and a talking rock. IT WAS NOT MEANT TO BE LIKE THIS!

My project Stitchmap all started with my twin brother and with the universal dilemma: what to give the person who has everything they really want or need. The answer was to combine my love of all things handmade and unique with an obsession with maps, and Stitchmap was born. His house is in the image called Sew-age Works. This was briefly on the short-list of what to call my project; tempting pun, until I did an online search and unsurprisingly came up with a lot of sewage works which might muddy (!) the waters for anyone looking for me online.

These maps take a long time to do, but I treat them as a version of mindfulness. Like walking, you can’t rush these stitches; they take as long as they take. In an age of social media, mass communication and Instagram it’s tempting to think that handmade items that take ages to make are old-fashioned or even obsolete; the other view is that these unique items acquire value as a result. As well as place-specific map embroideries you will see that I also do ones which are a more creative take on maps, using them as a jumping off point.

Julia is happy to do school visits for readings and workshops.