The funny thing about writing Paupers is that I realised – long after I finished it – that there is a bit of me in all my characters. It sort of happened without my planning it.

Mrs Smith is my favourite character. She’s big and loud and often cross, but she bakes the best cakes in the world and has a heart of gold. She’s got big muscles from all the kneading of bread and rolling of pastry and from turning the handle of the massive mincing machine which is clamped to the kitchen table. You have to say you really like her food or she’ll get very grumpy.

Lulie is the main character in Paupers. She describes herself as a little brown mouse. Maybe that’s how she feels but she really doesn’t turn out that way. She’s from the eighteenth century version of the broken home. Her father’s an alcoholic and her mother doesn’t go out much. But I would be telling you too much If I told you the reason for that.

Princess Wilhelmina is a very princess-y princess. She’s a bit of a pain, actually, in the way that very very pretty girls can be a pain. You’ve got the picture already, I bet.

Lady Marina Fitzrichard looks down her nose at everyone. Lulie can feel her knees knocking together whenever she sees Lady Marina. If you saw her coming yours would knock together too!

Georgie is a really lovely boy. But (I’m going to whisper this bit) he’s a bit boring. But he plays a very important part in the story so you musn’t ignore him.

Mr Verey. Ah, Mr Verey. I think I love him a little bit. He’s very handsome but ever so slightly tatty. (I think he sometimes forgets to brush his hair – see what I mean?) And he’s an artist, so don’t go thinking he’s going to take you to expensive places, because he’s got no money at all.

The Prince. What can I say about the prince? If I was being nice I’d say he’s the “product of his upbringing.” If I wasn’t being so nice I’d say he’s mean, snobbish, shallow and selfish. He’s a bit uptight as well; he always carries a pair of gloves, and even when he’s saying something normal the gloves twitch as if he’s trying to hold in some bad thoughts but not really managing to.

Mr Wilberswick is my second favourite person in the story. He doesn’t manage very well since his wife died. He lives in a little house by the sea with his memories and a lot of moths that nibble the curtains.

Coming soon: Listen to Julia reading an extract from Chapter 1

From ‘Books For Keeps’, July 2014
Review written by Janet Fisher
The Writing for Young People MA at Bath Spa University consistently brings forth writers who are producing interesting, sometimes quirky novels. This story is one such example. Set in an unspecified time, but with clues that it might perhaps be early Victorian, it tell of Lulie Mayville, who is summoned to the palace to serve the Lady Wilhelmina, who is about to marry the Prince Antineo of Langden. After the wedding Lulie serves the now Princess Wilhelmina and quickly discovers all is not well with the marriage, not least because the Prince has eyes for another lady. When Mr. Verey comes to paint the Princess’ portrait it is soon obvious that there is an attraction between them. But the Pauper’s Pox, which afflicted Lulie’s mother, now claims another victim, the princess herself. Lulie overhears plans to get rid of her mistress and the two of them plan to run away. Aided by Georgie the gardener’s son, leave in the night and find themselves in Folestoken after an offer of a job is made. There they settle and Lulie at last sees the sea, but the bunglenabbers (fantastic name!), are seen in the town, an indication that they have been discovered.

The author has a nice way with words and some lovely phrases, and bunglenabbers will stay long in my mind. Where does Folestoken bring to mind? This is an enchanting story with a little romance, a villain, adventure, and a spunky heroine. The people that the girls meet on their way, especially the lovely Mr. Wilberswick for whom they keep house, are real characters who warm the pages, a contrast to so many other stories. This is a beautifully written story which reads a bit like a fairy tale and one can look forward to further tales of Lulie. 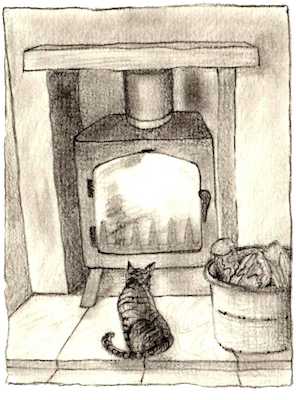